November 1, 2287 – It was time to take another stab at the weapon locked up in the Overseer’s office. I had been thinking about it for days now, and with my pending trip into the city and all the unknowns that could lie in wait for me on the journey, I was looking for any extra edge I could find. I told Preston if I wasn’t back before sunrise, I was stuck in the vault. He asked if I wanted one of the Minutemen to come with me, but I refused the offer. This was a private matter. Still, I didn’t want to be the only living thing down there besides the radroaches, so I took Dogmeat along. 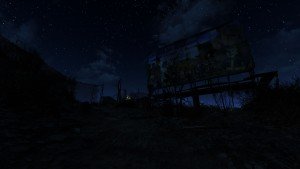 Heading Back to Vault 111

We went up the path on the backside of Sanctuary Hills and I hit the button in the control booth that would start the lift on its way down, then ran to the platform.

The air at the bottom was hard to breathe. Cold, and with an antiseptic, metallic taste that coated your mouth and nostrils. I hadn’t even noticed it last time I had been here.

Vault-Tec had marketed these vaults as the way to stay alive if the unthinkable happened. But this wasn’t the way to stay alive, it was just another way to die. Life was outside, or at least a better chance at it, and clearly most of the employees that had worked here had figured that out for themselves not seven months after they got sealed in. They were just a little ahead of schedule. The world wouldn’t have cooled down for a decade or so. Maybe a little less.

So the Overseer was dead. Long live the Overseer. Or at least his shiny weapon in a case. But I still couldn’t open the goddamn thing, even with help from the PipBoy.

Despondent, I sat in the Overseer’s chair. I wondered what it was like, sitting here, when the mob on the other side of the door at the end of the room was screaming for him to let them out. He was sitting here, while they were cutting the door controls to get to him.

I looked over at the case. Why hadn’t he gotten the weapon? Why would he sit here with just a pistol? He probably could have killed every single one that crew. He didn’t want to open the vault, but he could have lived. Either he couldn’t bring himself to kill his own crew, or he had just given up.

I guess I could understand that. This place was death. I still remembered being greeted by the smiling faces of the Vault-Tec staff who had “saved” Nora, Shaun and me. But these weren’t benevolent doctors and scientists. They were cold blooded killers. They had closed us in our individual coffins, sealed them shut, and left us for dead. 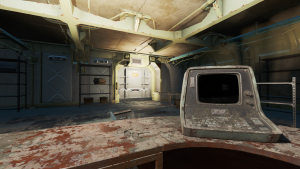 View from the Overseer’s Desk

I thought about Nora, her cryogenic chamber a few hallways and doors away, and then I remembered I still had that holotape Codsworth had given me the first day I went back to Sanctuary Hills. I hadn’t been ready to hear Nora’s voice again, but now seemed a good time to listen to it. I was alone. Well, except for Dogmeat, who was at my feet, sprawled out on the floor, apparently waiting to see what I was going to do next.

I popped the holotape in the terminal.

Shaun’s baby cooing noises echoed off the cold concrete and steel walls. I put my head in my hands. No, I was not ready for this. But I continued to listen… Nora’s voice. It had been tough, but we’d get through it. I was a good father. We’d make it work. She loved me. They loved me. More of Shaun’s precious cooing.

Then the tape stopped.

I completely lost it. I stood up and screamed, and smashed the terminal off the desk, causing Dogmeat to start barking at the heap of busted electronics.

While my son had been out there somewhere, and even though I had a lead for Diamond City, I had been fucking around with these people who had nothing to do with me, who I had no relation to, and who, let’s face it, had been taking advantage of me. And now I had committed myself to rescuing and bringing back someone I didn’t even know, from a place not a mile away from where I might find information about who took my son and where he might be.

I had lost sight of what I was supposed to do. I had lost sight of who I was. Shaun was what was important now. How could I have gotten sidetracked for so long? I had my lead, I should have gone immediately to Diamond City when I had the chance. But now I had signed up for a rescue mission.

No more. It was time to put myself first. Time to put Shaun first. And you know what? It was about time Preston started carrying his own water. He wants to call himself the leader of the Minutemen? It’s damn near time he started acting like it instead of just asking me to go help out every settlers outpost from here to the Waterfront. I had already politely refused him on a number of occasions, thinking my time was better spent helping those of us in Sanctuary Hills, but I was even getting sick of him asking.

I haven’t written about that much because I don’t want to dwell on it, but obviously it’s been getting on my nerves.

This was the last time. Last mission. Then, I was going to Diamond City. I owed that to Shaun, and to Nora.

When I regained control of my senses, I noticed Dogmeat was off on the side of the office near the small steel-caged room where the Overseer’s weapon case was mounted to the wall.

The weapon – something called a “Cryolator” – was at Dogmeat’s feet, and he was looking at me, waiting. While I had been having an epic meltdown, Dogmeat had somehow opened the case and retrieved the weapon. Who’s a GOOD BOY, Dogmeat?

It was time to get the hell out of here, try to get an hour or two of sleep if I could, and begin what I resolved would be my last mission for Preston and the Minutemen.

Check out my friends at The Fallout Feed, a great podcast dedicated to the Fallout game series. The show is hosted by Jess, Ray, and Andrew along with a coterie of guests who discuss everything from gameplay to detailed mod builds.

Nick Valentine, in the flesh... well, sort of

Nick is down here somewhere