When I left the Red Rocket, it was late morning. My new pal and I walked down the hill into Concord. It seemed most of the buildings had fared a little better than those in Sanctuary Hills. They don’t make them like they used to, apparently. It was eerie walking through an old outer-space themed playground in the back of a group of 400 year old houses. Metal spaceship clubhouse that was still pretty brightly colored, teeter-totters, one of those little bouncy spaceships on a big spring, just about toddler sized. I’m going to find Shaun and I’m going to take him back here someday.

As I got closer to the center of town, I heard the snapping of gunfire. Light stuff. Then a laser. I approached cautiously, wondering if my new companion was going to give me away by barking. He stayed quiet — good training? He watched me the whole time, sneaking along with me as we neared the conflict. Rounding the last corner toward the Museum of Freedom, I could see a handful of people dressed in animal skins were attacking the Museum. A guy with a laser was up top on the Museum roof, shooting down at them. I quickly decided defenders outweighed attackers on the morality scale, and the folks holed up in the Museum were the ones most likely to be able to help me. 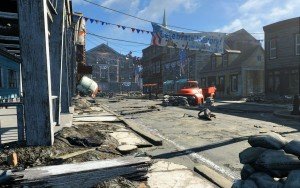 Raiders Attack the Museum of Freedom in Concord

The laser guy was picking the raiders off pretty cleanly, and the ones left were hiding behind bags of sand, barrels and old cars, right in my line of sight. So, I started attacking from the back. Took one of them out immediately with a shot to the head from my 10mm and started firing on another one. As soon as the first bullet left my pistol, the German Shepard made a mad dash for a raider in the middle of the street. He jumped on the guy’s back, knocking him down, and before I knew it, he was tearing the guy’s throat out. No fear in this one.

By this point, the only raider left was hiding out in a store on the left side of the Museum. The dog rushed in, and when the guy stood up to shoot, I took him out with a headshot. Now I had to figure out whether or not the guy on the roof was going to group me in with the attackers, or if he had seen me helping him clear them out.

A voice yelled down for me to grab the laser weapon someone had dropped at the entrance to the Museum, and to get in quick. Soon as I was in, I was under fire again. More skins. I made my way toward the roof using the new weapon, which unfortunately I had to crank up every time I wanted to use it, but it packed a whallop, frying anything in its path to red dust, so I figured it was my best shot at pushing through. The place was just a dustcloud of chaos, with old recordings blaring, gunshots everywhere, and pieces of the Museum getting shot to hell.

Up some more stairs, I entered a balcony. There were two guys trying to open a door at one end. I fried the first one, but then had to watch, helpless, as the second one charged me while I cranked up the gun again. He swung a machete at me just as I pulled the trigger. The foul stench of his breath was replaced by burning flesh, and then it was quiet. 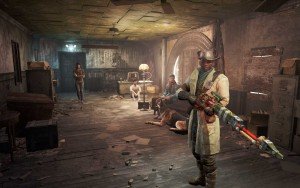 Preston Garvey and The Minutemen

The door opened, and behind it was a sorry looking group. Five in all. Their leader, Preston Garvey, said he was the last of the “Minutemen.” How original. Garvey said the last group of Minutemen were killed defending Quincy in the Quincy Massacre. I’ll have to find out more about that. There’s so much I need to catch up on. After the Quincy Massacre, they made it to Lexington where Garvey said they were attacked by “ghouls — irradiated humans whose brains had become rotted by radiation.” Did I get that right? I don’t know, because there wasn’t much time to talk. All I knew was that their numbers were dwindling fast. Nineteen left Quincy to Lexington, eight made it here to Concord, and now there were five. Now, raiders were threatening what was left of them.

An electronics engineer named Sturges said there was some old T-45 Power Armor up on the roof in a crashed Vertiberd, but the only power source was locked up in the basement of the Museum behind a terminal. He said if I could get the fusion core from the basement and power up the armor, I could probably also grab the minigun from the Vertiberd. 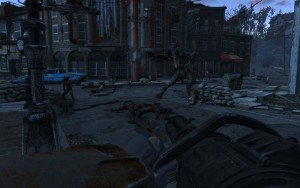 With the help of my Pip Boy, I figured it wouldn’t be a problem. Sure enough, five minutes later, I was up on the roof, stepping into the now-powered Power Armor, helping the group fight off the next wave of raiders that had arrived in town. I’m only skimming past what seems like it should be a major event (finding working Power Armor, and actually friggin’ using said armor, and grabbing the minigun like a BoS) because what happened next is something that will haunt me to my grave.

After jumping down off the Museum roof and mowing down raiders all the way down the street, I thought the battle was over. But crawling up out of the pits of hell in the fading light was the most terrible creature I could ever have imagined. It burst out of the pavement, almost two stories tall, a powerhouse of claws and teeth. I was glad I had been careful with my ammo, because the full force of the minigun didn’t seem to be stopping this thing much. I downed some Psycho and stood right in front of it, hitting it with everything left in the chain. It hit the armor hard twice, knocking me off my feet each time. I started injecting Stimpaks as if I had a million of ’em. I didn’t. I had eight.

Finally, the damn thing was dead. I took one of its claws as a souvenir and headed back to the Museum, where I was informed I had just killed a “Deathclaw.” Fitting name if I ever heard one.

But apparently, that wasn’t enough shock and awe for one day. One of the Minutemen group was an old woman — kind of batty, and obvious chem user — named Mama Murphy. She pulled me aside and said that she could “see my pain.” When I asked what the hell she was talking about, she said I was a “man out of time, and out of hope.” I started to lose my patience with her when she dropped the line, “your son is alive.” 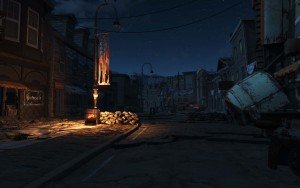 Heading Back to Sanctuary Hills

She said she was tired, but that she would tell me more later, when she could get some chems for “The Sight.” Preston came over and admonished her, saying the chems would kill her in the end. I got the distinct impression his words were for my benefit. He turned to me, noted they were going on to Sanctuary and that I was welcome to follow them.

Mama was the only lead I had. Looks like I was going back home. At least, that’s where I figured this “Sanctuary” was. Had to be Sanctuary Hills.

We started out under cover of darkness. Who knew if there would be more raiders around. I needed this trip to go as quickly and as quietly as possible. The day had been too long already. I just wanted some sleep and to find out anything else Mama Murphy had to say.

Oh, and this German Shepard that had been following me and helping me all afternoon? His name is Dogmeat. He belongs to the Minutemen. 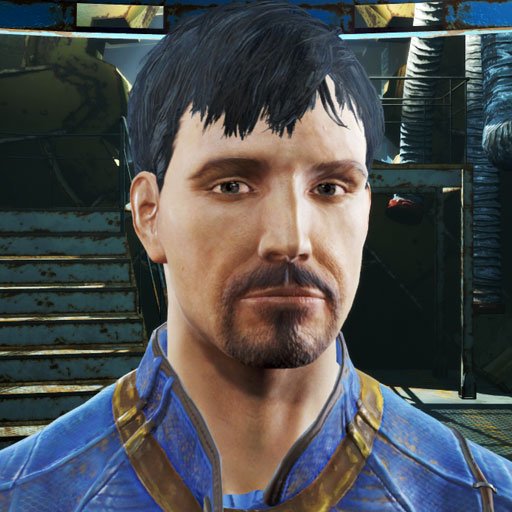 Check out my friends at The Fallout Feed, a great podcast dedicated to the Fallout game series. The show is hosted by Jess, Ray, and Andrew along with a coterie of guests who discuss everything from gameplay to detailed mod builds.

Nick Valentine, in the flesh... well, sort of

Nick is down here somewhere